Ratingen. Directly at the stream Anger and surrounded by an old English country park lies one of the oldest remaining industrial plants in Germany: The cotton spinning Cromford in Ratingen. In 1783/84 founded by the merchant and entrepreneur Johann Gottfried Brügelmann, it is nowadays considered to be the first fully mechanical cotton spinning on the European continent. The plant from the early industrial time is almost completely preserved: the “High Factory” with its five floors and the Mansion in late baroque style – today both are buildings of the LVR-Industriemuseum, the “Old Factory”, the plain worker’s flats, the overseas branch and the wheel house, which once contained the water wheel.

Today the permanent exhibition of the LVR-Industriemuseum in Ratingen can be seen where only 30 years ago, spinning and weaving happened on a grand scale. Here the introduction of the factory system is explained on the example of the history of Cromford. On the basis of an exhibition production on originally rebuilt spinning machines, the making of cotton yarn from the raw material to the finished yarn, as it was 200 years ago, can be observed. In the mansion Cromford another permanent exhibition tells about the eventful life of the former industrialist family.

Entering the “High Factory” one is standing in front of the huge wooden water wheel, which drives, as in the 18th century, all the spinning machines in the factory over a transmission. Here on the ground floor it provides power for the “Water Frame”, the first fully mechanical spinning machine. The entrepreneur of the factory Johann Gottfried Brügelmann must have heard from this fine spinning machine, which was invented by Richard Arkwright in England. And he succeeded, supposedly by industrial espionage, in rebuilding this machine in Ratingen.

From raw cotton to yarn

On the first floor of the factory the commodity is the central topic: Where does cotton come from? How did it find its way to Europe? Which part had the early industrial factories in the slave trading in America? After this, the different steps of production on the way to a finished yarn are explained. It is shown how the cotton is pounded, cleaned, combed, stretched and twisted into a loosely string. But the visitors do not only get to know the technical part of the cotton manufacture. The machines with their sharp sprockets, open running gears and driving belts tell about the dangers of this work. And the cotton dust, which flies in the air, makes one sense how dangerous the working conditions were for the health of the employees.

World of work – world of fashion

When stepping onto the floor above an original “Mule”, a spinning machine from the early 19th century shows how the workers were subjugated to the rhythm of the machines. Most of them were children. For child labour was taken for granted in 1800 also in Cromford. The visitors get to know what child labour meant in these times from fighting for its containment with the first child protection law and to the construction of a factory school.

The world of work and production is confronted with the world of consume and fashion. In 1800 the new soft cotton fabrics with their bright colours were very popular. Even though only a few of these cotton dresses survived time, the museum managed to build an impressive collection. They are completed with accessories and examples of earliest fashion magazines.

Besides the permanent exhibition, changing exhibitions are shown regularly on the upper floors of the “High Factory”. Especially exhibitions about the cultural history of clothing build the focal theme. Through this, new parts of the costume and fashion collection of the LVR-Industriemuseum are presented regularly.

Leaving the factory and walking over the former factory yard, the back entrance of the mansion Cromford, the house of the former industrialist, comes in sight. In the style of an aristocratic summer residence from the late baroque, it mirrors in furnishing and size the achievements of one of the most successful entrepreneurs of his time: Johann Gottfried Brügelmann. The permanent exhibition on the ground floor, which opened in May 2010, informs about the life and economic actions of the first four generations of the company from the beginning of the 18th century to the year 1848. It tells about the economic trade in eventful times, as well as about the very private things, e.g. their favourite food, hunting, wedding plans, their servants or the preparations for a celebration.

In 14 rooms with more than 320 square meters and over 250 exhibits, the family members come to life again. Each room is dedicated to a person, whose history is told via audio guide in form of an audio drama. Still, the house itself is in the centre of attention. It is the most important exhibit and for this it is included as a monument.

On the first floor the representative highlight awaits the visitors: the “Gartensaal” (garden hall). The almost circular room extends over two floors and is decorated with classic landscape paintings on the wall. Huge mirrors and console tables round the grand impression of the salon off.

A walk in the park will complete the visit of the museum.

For over 200 years, cotton was manufactured in Cromford. Founded in 1783/4, the factory experienced a rapid lift. Despite of many different crises, temporary standstill or foreign use – during the Second World War the spinning was used for the production of detonators – the factory was able to maintain until it was ultimately closed in 1977. In the same year, a huge part of the factory expansion from the 19th century was torn down. Also the deconstruction of the “High Factory” was already decided. But shortly before the demolition it was declared to be a listed building. The factory and the mansion were restored, the exhibition was installed and in 1996 they reopened as the LVR-Industriemuseum Ratingen.

Entertaining and eventful variety of program

An extensive education programme with interesting activities completes the offers of the permanent- and the special exhibitions. Guided tours for groups can be booked for different groups of ages and subject areas. Interactive and activity-oriented projects and holiday-programs for children and adolescents, as well as an extensive supporting programme with lectures, field trips and concerts for adults complete the offer.

Also celebrations are held frequently: Children can choose from the museums educational offers and build their own programme to celebrate their birthday in the museum. Furthermore, clubs, companies, institutions and private people use the museum as a location for their events and festivities. And in summer the “Gartensaal” is a popular place for civil marriages.

The textile factory Cromford in Ratingen is one of a total of seven exhibition sites of the LVR-Industriemuseum, which combined, create a unique museum. In historical factories, of which some are listed for preservation, the history of the industry in the Rhineland and its workers is told in an interesting and illustrative way. The focus is put on metal, fabrics, paper and electricity, as the local branches. Apart from the The textile factory Cromford the other museums are waiting to be explored: the Gesenkschmiede Hendrichs in Solingen, the Kraftwerk Ermen & Engels in Engelskirchen, the Tuchfabrik Müller in Euskirchen, the Papiermühle Alte Dombach in Bergisch Gladbach, the Zinkfabrik Altenberg as well as the St. Antony-Hütte in Oberhausen. Furthermore, the museum’s headquarter with management, administration, depositories, library, photo archive and garages is placed in Oberhausen. Founder and bearer of the LVR-Industriemuseum is the Landschaftsverband Rheinland (LVR).

Children and adolescent up to 18 years get free admission to the museum!

The following photographs are only to be used for editorial purposes in the context of coverage about the LVR-Industriemuseum and have to be marked with the copyright “©LVR-Industriemuseum”. Their printing is free of charge, but we would like to receive a specimen copy. The usage outside of this context is prohibited. 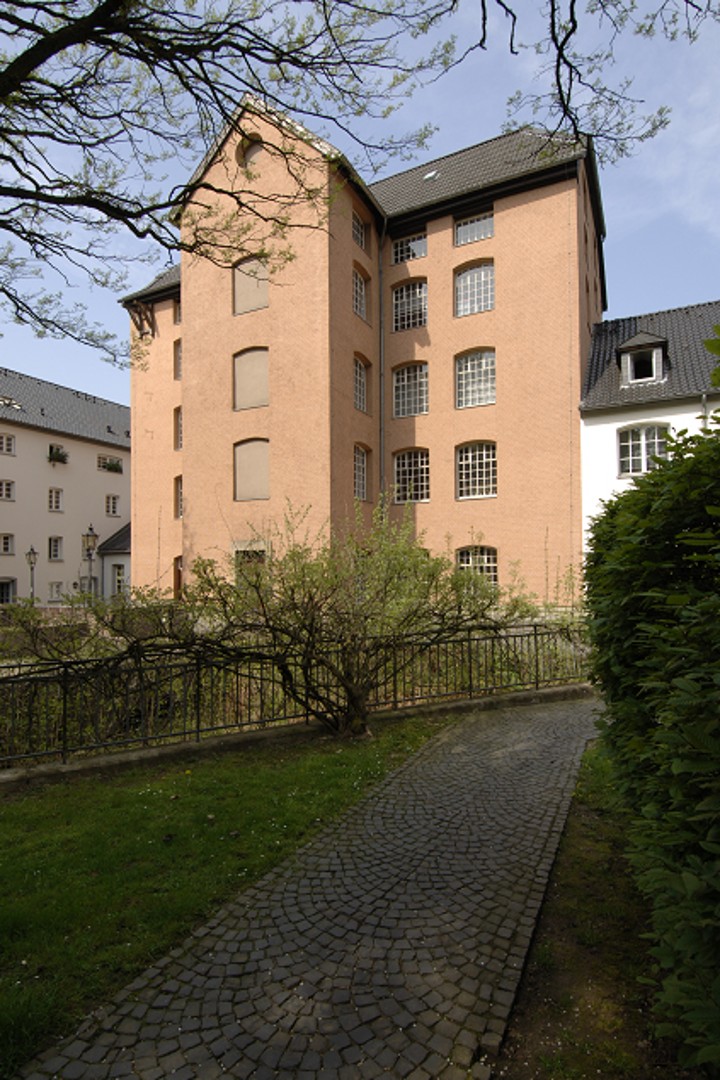 Exterior view of the “high factory” of the cotton spinning Cromford, which was founded in 1783/84 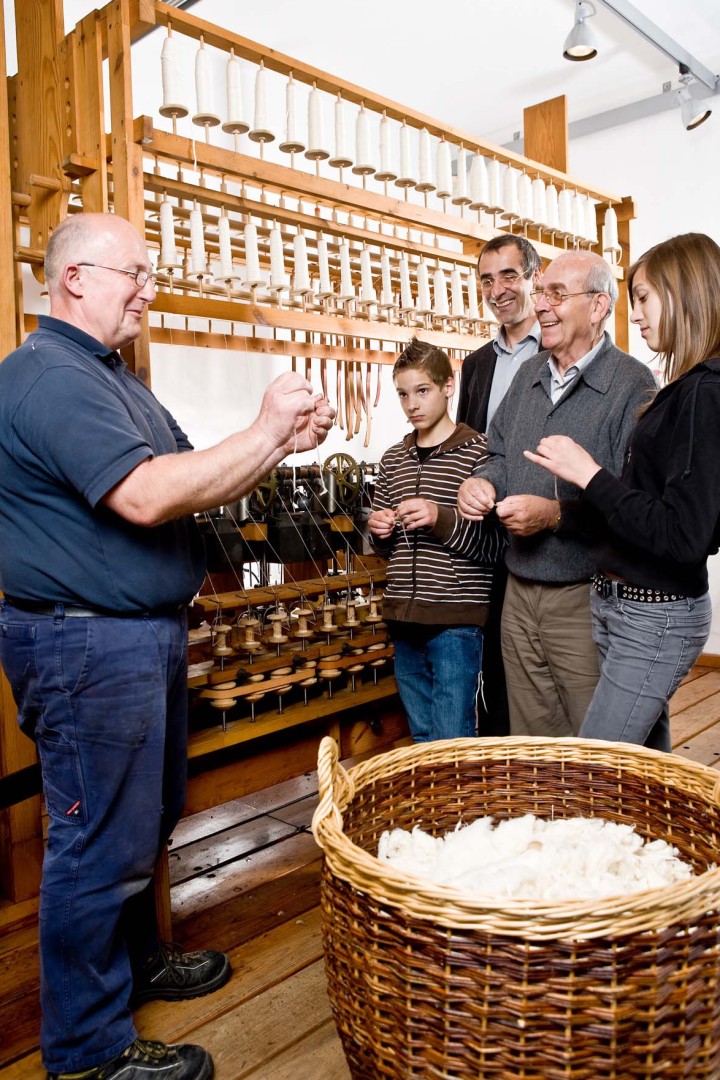 On the basis of unique originally rebuild spinning machines, the LVR-Industriemuseum Ratingen makes it possible to experience the production of cotton yarn from the raw material to the yarn as it was over 230 years ago. 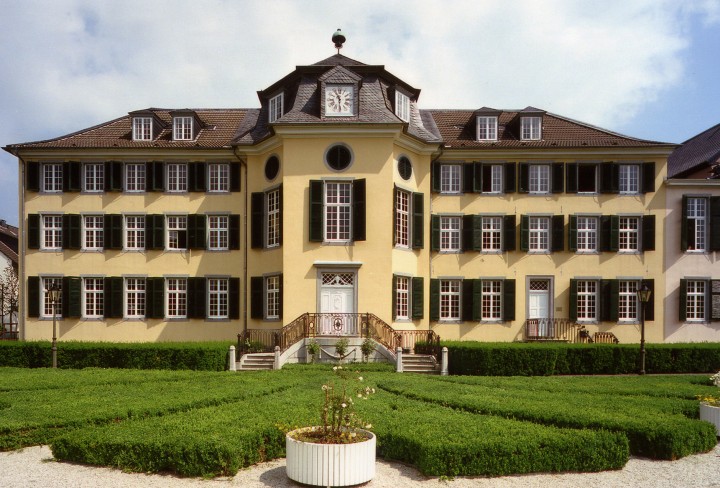 Exterior view of the Mansion Cromford, which shows the permanent exhibition about the living conditions of the industrialist´ family Brügelmann. 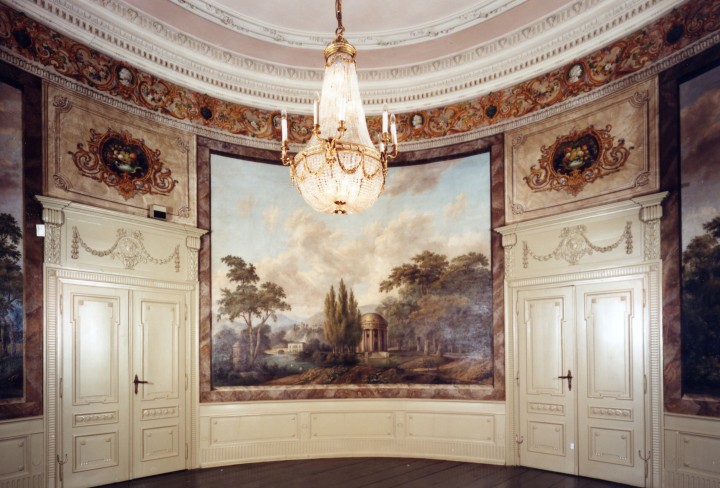 On the first floor of the mansion, the highlight of the residence awaits its visitors: the “Gartensaal” (garden hall)